AUSTIN, Texas — The thing about this game was that Texas knew adversity was going to hit at some point Saturday. It just didn’t know how eerily familiar it would be.

The last time Texas and Alabama faced each other — in the 2010 national championship — the Longhorns lost starting quarterback Colt McCoy in the first quarter, lost the game, and the program lost its way for the next 12 years.

In Saturday’s meeting between unranked Texas and No. 1 Alabama, something strangely similar occurred. The Longhorns lost starting quarterback Quinn Ewers to injury in the first quarter and lost the game, 20-19.

Check out highlights from Alabama’s thrilling 20-19 victory over the Texas Longhorns in Austin.

But this feels incredibly different. Nobody truly gave Texas a chance against mighty Alabama. The Longhorns were looking for a measuring stick and validation for Steve Sarkisian’s master plan for the program. The way this team handled adversity and the pressure of the moment means there’s finally something to be optimistic about in Austin moving forward.

“Texas played a great game today. There are clear steps forward for this team. They did a great job for a huge portion of this game and they’re going to feel like they let one get away, certainly,” Joel Klatt said on the FOX broadcast. “This is a huge step forward for the Longhorn program against Alabama, which is the standard-bearer of college football.”

This game felt like a strange full-circle moment. Texas has struggled to find consistency ever since that 2010 national championship game, sporting an average record of 7-6 in 12 seasons. Steve Sarkisian is the program’s fourth head coach in that time period. Now he might have given it reason to believe the tide is turning.

Coming in, this game was not short on storylines. There was Sarkisian facing his former boss and mentor Nick Saban, the 2010 title game rematch, Saban one time being offered the head coaching job at Texas, Sarkisian knowing both QBs extremely well.

The atmosphere was electric well before kickoff. More than 100,000 fans dressed in their burnt orange best piled into Darrell K. Royal Texas-Memorial Stadium and were loud all game. Students started lining up outside the stadium at 4 a.m. just so they could get a good seat. One student said he got there that early just so he could hopefully sit in the front row and storm the field if Texas shocked the world.

Alabama was a 20-point favorite on the road and pundits everywhere agreed that this would be a massacre.

The Longhorns started strong, even if they only scored one touchdown all game — Bijan Robinson on an easy 1-yard rush to start the second quarter, capping a six-play, 75-yard drive. Ewers looked comfortable and confident, effortlessly leading the Horns downfield. He found Jordan Whittington for 17 yards with two Alabama linemen in his face, then Xavier Worthy for 46 yards on the next play.

Then came the play.

With less than a minute remaining in the first quarter, linebacker Dallas Turner drove Ewers into the ground. The quarterback was slow to get up and went straight to the locker room, favoring his left shoulder. He returned in the second half on the sideline wearing street clothes.

It was at that moment every Texas fan had the worst kind of deja vu.

Rather than succumb to mighty Alabama, though, backup quarterback Hudson Card pulled off a more than respectable performance, going 14-for-22 for 158 yards with no interceptions. And this was behind an inexperienced starting offensive line that includes two freshmen, two sophomores and one senior.

Texas’ defense was the surprise story with an impressive game plan from coordinator Pete Kwiatkowski. The unit pressured reigning Heisman Trophy winner Bryce Young (27-for-39 for 213 yards and one TD) and made him uncomfortable.

We’ve become so accustomed to Alabama scoring at will. At one point, the Tide had four consecutive three-and-outs. They punted on six drives. Alabama also committed 15 penalties.

Texas fans have held on tight to the notion that if McCoy hadn’t gotten hurt in 2010, the Longhorns would have won the national championship. There will likely be some of that after this regular-season game. Worthy bobbled a would-be touchdown in the first quarter, had another close score but caught the ball out of bounds and D’Shawn Jamison nearly intercepted Young in the second quarter. Texas had chances but just felt slightly short of capitalizing.

In the third quarter with the game tied 10-10, Alabama started a drive at its own 1-yard line after Danny Trejo’s 50-yard punt. On third-and-7, Texas smothered Young, sacked him and recovered a safety. The cannon went off and it looked like the Horns would take their first lead. Then, in a controversial and wildly confusing review, officials first ruled targeting, then roughing the passer, then changed the call to an incomplete pass, which saved Alabama from a momentum swing.

WILD sequence: Safety? Penalty? None of the above! 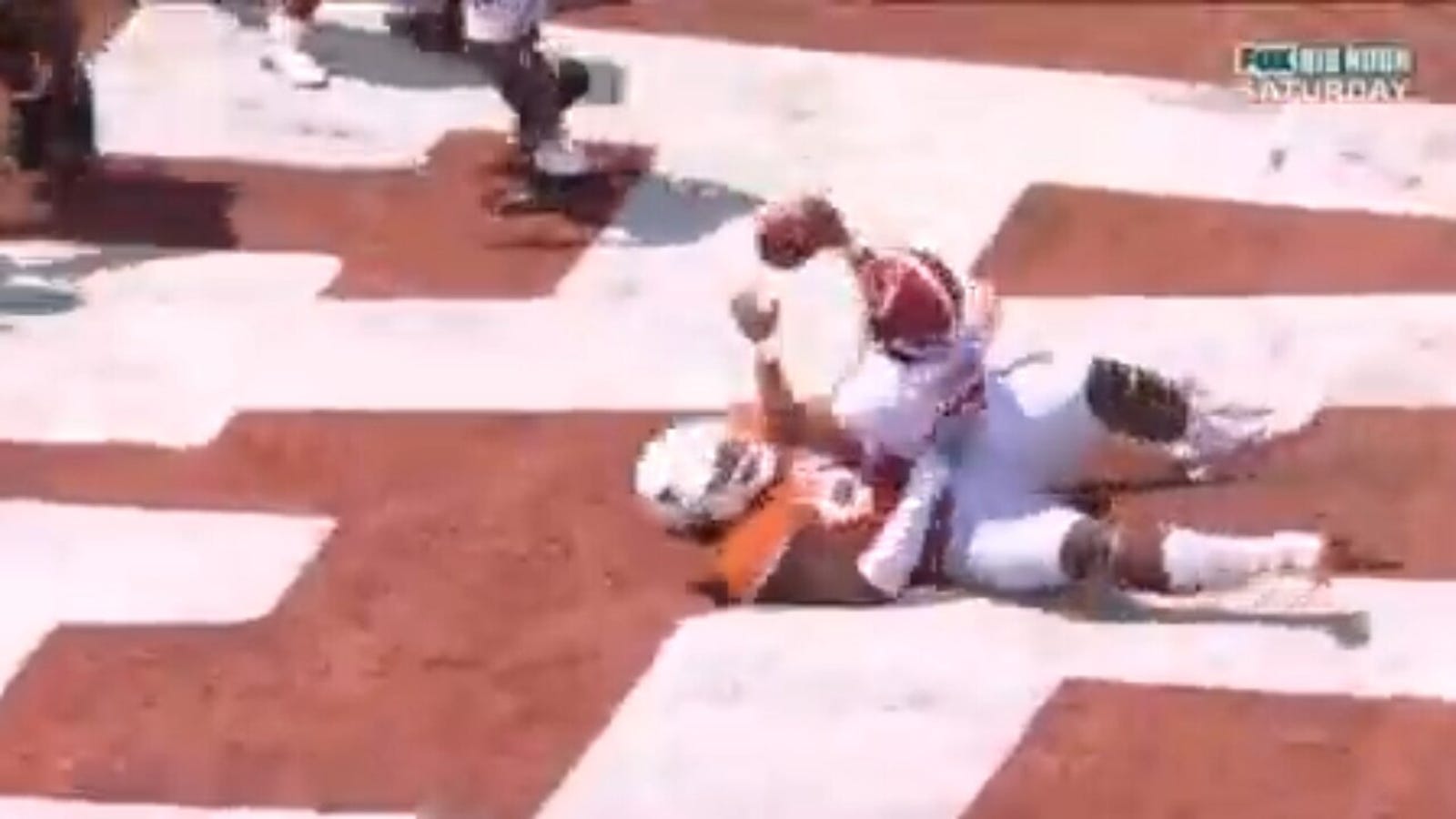 Check out this WILD sequence featuring an overturned safety, roughing the passer and targeting all in one play between the Alabama Crimson Tide and Texas Longhorns.

Leading 17-16 late in the fourth, Alabama went for it on fourth-and-1, but Texas made a huge stop, leaving Card 3:55 on the clock. After getting sacked by Will Anderson Jr. on third down, the Horns kicker, who is oddly named Bert Auburn, kicked a 49-yard field goal to take a 19-17 lead with 1:29 remaining.

Unfortunately for Texas, that was too much time to give Young, who evaded a sack from Ryan Watts and turned the play into a 20-point gain. It was an incredible, Heisman moment-worthy play. Four plays later, Alabama kicked a 33-yard field goal to seal the win.

For Texas, it was a loss to Alabama, just like 2010, but this time, the Longhorns should feel like it was a win – or at least a sign of big things to come.

Laken Litman covers college football, college basketball and soccer for FOX Sports. She previously wrote for Sports Illustrated, USA Today and The Indianapolis Star. She is the author of “Strong Like a Woman,” published in spring 2022 to mark the 50th anniversary of Title IX. Follow her on Twitter @LakenLitman.

Marvel Confirms Fantastic Four Director (And Nothing Else) At D23

Sean Payton explains why Ken Dorsey’s meltdown was so relatable

49ers vs. Broncos was one of the worst NFL games Nick has ever seen | What’s Wright?