On Aug. 26, the Brewers sat 2.5 games out of a wild-card spot, behind the Padres. Now, they’re 1.5 games back of a playoff spot with nine games to go.

The Padres and Phillies have since switched spots in the wild-card order — they would be the Nos. 5 and 6 seeds, respectively, if the season ended today — but the playoff field hasn’t changed. It remains a race among the Padres, Phillies and Brewers for the final two spots.

Meanwhile, the NL East offers the only tight division race left. One game separates the Braves and Mets with eight games remaining on each of their schedules. The division will likely be decided this weekend, when the two teams clash in Atlanta — that is, if Hurricane Ian doesn’t wreak havoc in Georgia. MLB might need to come up with contingency plans as the storm approaches.

Let’s take a look at the NL contenders as of today.

The Dodgers’ most recent victory clinched them the top seed in the NL playoffs. Their next victory will set a franchise wins record. They’re in cruise control heading into October, using this time to get their regulars rest ahead of the postseason.

Health is the primary concern right now for the Dodgers, who are expecting starter Tony Gonsolin (forearm strain) and reliever Yency Almonte (elbow tightness) to return soon. Gonsolin will have a rehab outing Tuesday. They’re also holding out hope that Blake Treinen (shoulder tightness) and Dustin May (lower back) can contribute in some fashion by October, though those two appear less certain to contribute with time winding down.

In a year full of unfortunate injury news for the Dodgers’ pitching staff (see: Walker Buehler, Treinen, Daniel Hudson, May, Gonsolin, etc.), Clayton Kershaw’s health is a major positive. Kershaw has bounced back from his latest back injury to post a 1.80 ERA in five September starts.

Kershaw, Julio Urías and Tyler Anderson appear to be locked in as playoff starters. Andrew Heaney, Gonsolin and May could also be in the mix to start, depending on health and matchup. It wouldn’t be a surprise to see some sort of piggyback situation among those players. There is uncertainty in the bullpen as well, as the Dodgers could enter the playoffs with a closer committee after demoting Craig Kimbrel. The last nine games of the regular season will largely be about figuring out postseason roles.

Is this the best Dodgers team ever?

Ben Verlander and Alex Curry discuss the Dodgers’ unbelievable season, in which they clinched the division title earlier than they ever had since moving to L.A.

Francisco Lindor has chosen an opportune time to play his best baseball of the year.

In his past 17 games, Lindor is slashing .361/.397/.625. He is the first Mets shortstop to record 100 RBIs in a season, though he is not the team’s leader in the category. That would be Pete Alonso, who is now tied with Aaron Judge for the most RBIs in baseball (128). The Mets will look to Lindor and Alonso, who has three homers and 10 RBIs over the past week, to guide their offense heading into October while Starling Marte continues to rehab a finger injury.

The Mets have started to take advantage of a weak late-September schedule, sweeping the Pirates before taking two of three from the Brewers and Athletics. Surprisingly, the Mets’ only loss to Oakland was a Jacob deGrom start in which the superstar right-hander lasted just four innings. He has now surrendered 11 runs over 15 innings in his past three starts, all against non-playoff opponents. On the bright side, Max Scherzer isn’t displaying any signs of rust as he builds back up after his latest oblique issue.

It’ll come down to the final eight games for the two beasts atop the East.

Trailing by one game in the division, the Braves will finish their final couple of games of their road trip in Washington before returning home to host a massive, three-game set against the Mets (if weather abides). The winner of the East will join the top-seed Dodgers with a coveted first-round bye, so there’s a lot for the Braves and Mets to play for down the stretch, despite their sizable advantage on the NL teams below them.

Spencer Strider‘s oblique injury looms — he hopes to be back for the postseason — but it helps to have a seemingly endless supply of rookie contributors. On Sunday, Bryce Elder threw a shutout. And while Vaughn Grissom has started to come back down to earth, Rookie of the Year contender Michael Harris II‘ consistent production has continued with a .943 OPS in September.

Atlanta will hope to get Ronald Acuña Jr. and Matt Olson going before season’s end. Acuña is back in the lineup after dealing with back tightness, while Olson homered Monday for the first time in 20 days. Olson is slashing .127/.222/.228 this month.

For a while, it seemed like this week’s two-game series against the Brewers might hold considerable implications in the Central race. But not so much anymore. Despite the Cardinals’ dropping two of their past three series, their magic number sits at three, and they’ll finish the regular season with six straight games against the Pirates after leaving Milwaukee on Wednesday. Their grasp of the division appears firm.

While much of the attention was on Jordan Montgomery after the deadline, it is another deadline acquisition currently lifting the St. Louis rotation. Jose Quintana has a 0.71 ERA in four starts this month, and his success has been especially important as Montgomery and veteran Adam Wainwright have begun to stumble in September. Albert Pujols‘ 700th homer rightly took center stage in Quintana’s last start, but the left-handed starter silenced the Dodgers in that 11-0 win by spinning 6⅔ scoreless innings. It was his second straight scoreless outing, along with blanking the Reds in eight innings.

That type of offensive output from the Cardinals’ powerful lineup has come more sparingly in recent days. St. Louis is slashing .220/.294/.381 as a team in September. Even with the 11-run outburst, the Cardinals are averaging fewer than three runs over their past eight games. 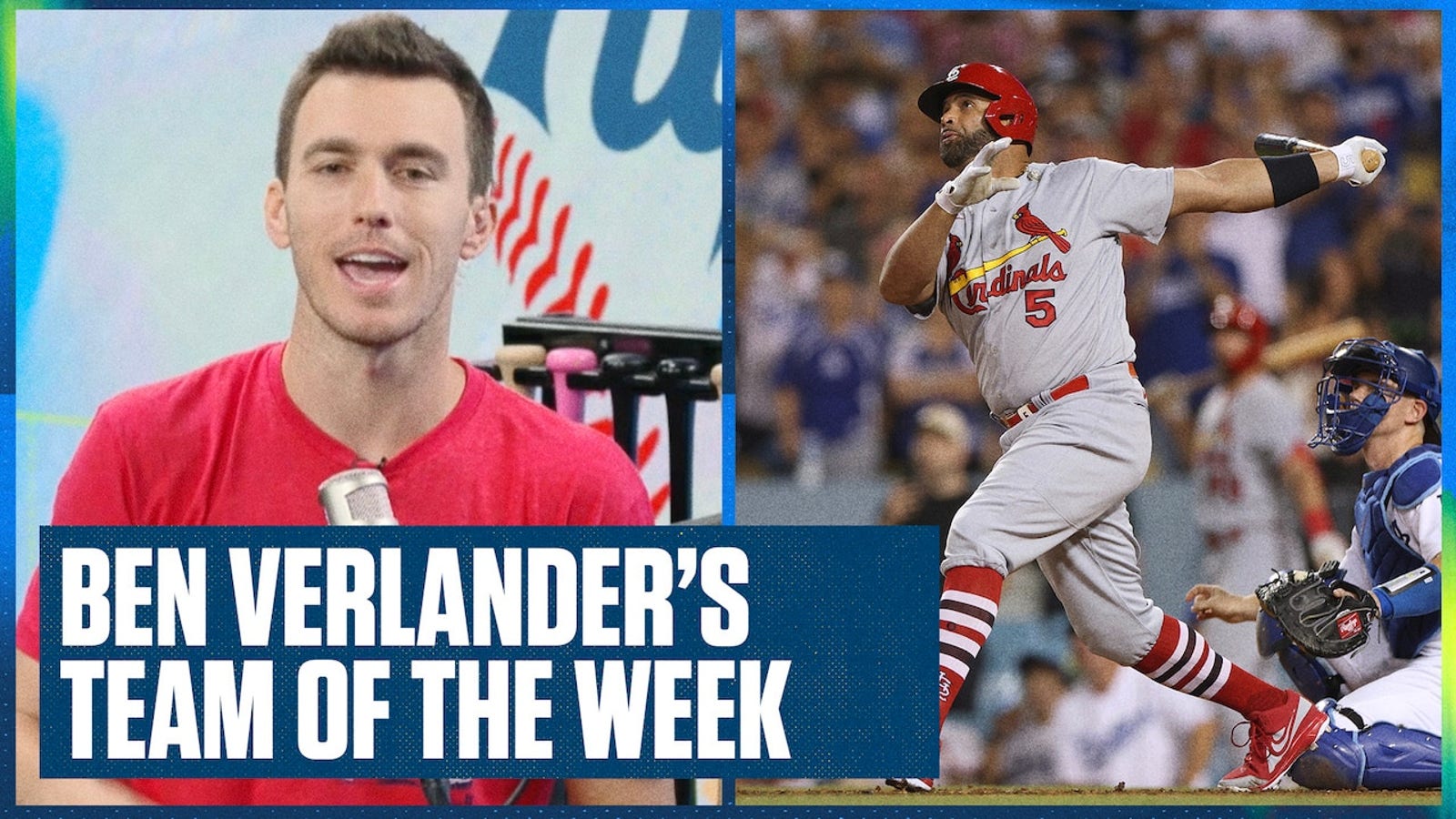 It’s a steep drop-off from the second-place team in the East to the trio of clubs competing for the last two wild-card spots, but the Padres might finally be finding a rhythm.

San Diego has arguably the toughest road ahead among the teams vying for the final wild-card spots, with series looming against the Dodgers, White Sox and Giants to finish the year. Still, the offense is starting to kick into gear — the Padres as a team have the third-best OPS in baseball over the past week — Manny Machado continues making a case for NL MVP consideration, Juan Soto and Josh Hader both appear to be getting back on track, and the Padres have won their past three series.

Plus, if they get in, not many teams will want to see a rotation of Yu Darvish, Blake Snell and Joe Musgrove right now. Darvish is 5-0 with a 1.36 ERA and 0.67 WHIP in September. Snell has 35 strikeouts and six walks over 24 September innings, most recently striking out 13 batters in seven shutout innings against the Cardinals last week. Musgrove has a 3.12 ERA on the year, though he was better in the first half than he has been in the second.

Thank goodness for Matt Vierling‘s big swing. A 5-for-5 day Wednesday for the outfielder included a game-winning, 10th-inning hit to rally the Phillies past the Blue Jays and snap a five-game losing skid.

After getting swept in Atlanta, the Phillies split with the Blue Jays and Braves in their final homestand of the year. The road life should bring some reprieve, as the Phillies will travel to face the Cubs and Nationals before ending their season with a three-game series in Houston that could include plenty of playoff implications, particularly considering the ease of the Brewers’ schedule to conclude the year. Philadelphia is currently 1.5 games ahead of Milwaukee for the final wild-card spot.

J.T. Realmuto has starred in September, hitting .300 while leading the team with seven homers and 15 RBIs, but the Phillies’ pitching staff is 10-11 with a 4.85 ERA this month. Zack Wheeler‘s return from forearm tendinitis — he threw four scoreless innings Wednesday — should help. The Phillies are also expecting outfielder Nick Castellanos (oblique injury) back this week.

They’re still hanging in there.

The Brewers continue to sit just outside the playoff picture, knocking at the door. They haven’t caught fire, but they’ve done just enough to stay in contention. Willy Adames is playing his best baseball of the season, knocking in 19 runs in 24 games this month. Brandon Woodruff is doing the same, posting a 1.67 ERA with 37 strikeouts in his past four starts to lift a pitching staff that holds a 4.22 ERA in September.

After a two-game series with the Cardinals, the Brewers end the season with seven games against the Marlins and Diamondbacks. Despite playing .500 baseball since their quiet deadline, they’re still very much in the race with nine games to play.

Rowan Kavner covers the Dodgers and NL West for FOX Sports. He previously was the Dodgers’ editor of digital and print publications. Follow him on Twitter at @RowanKavner.

Could An Eric Young-Led SAnitY Return To Triple H's WWE?