This week Jim Harbaugh has said a lot, in his Jim Harbaugh kind of way, which usually means discussing topics that are being popularly debated but injecting his own twist.

That’s how a discourse about the virtues of Michigan’s star running back Blake Corum included commentary on the dental hygiene of opposition players (kind of) and how an admission that Iowa’s defense is imposing turned into a history lesson spanning a quarter-century timeline.

It’s all good, colorful stuff, which contributes to Harbaugh being one of college football’s most entertaining coaches — definitely not universally loved, but indisputably one of the key larger-than-life sideline figures that help make the game what it is.

Yet when addressing the most pressing and nationally relevant thing about his team’s trip to Kinnick Stadium to take on the Hawkeyes this Saturday (noon ET; FOX and the FOX Sports app), he borrowed from a well-worn phrase instead of conjuring his own Harbaugh-esque quip.

Previewing No. 4 Michigan vs. Iowa

Joel Klatt breaks down the game between No. 4 Michigan and Iowa, explaining how the Hawkeyes can capitalize on potential mistakes.

“As they say, it’s where top-five teams go to die,” Harbaugh said.

If Michigan’s bid for a place in the College Football Playoff is going to come undone early, this is a popular choice for where it could happen, amid the intensity of Kinnick and against a defense that has surrendered just 23 points in three games so far.

Make no mistake, Michigan is the favorite, and rightly so. FOX Bet has Iowa as an 11-point underdog, but the reason the sniff of an upset is in the air is that it is easy to see how things might go wrong for Harbaugh’s men. Far simpler, truthfully, than it was to imagine potential problems last week when Maryland surprisingly took it to them and gave the Wolverines a serious scare.

Corum is setting an incredible pace in the running game, and Michigan has scored more points than any team that’s played four games, but Iowa has not allowed a rushing touchdown all season and permits just two yards per carry.

Something has to give.

In its first serious test in an unwelcoming environment, Michigan, quite simply, has to embrace the drag-out, physical, relentless nature of the contest. This clash purports to be a battle for field position, old-school Big Ten action, compellingly ferocious for the viewers, taxing on every level for those in the middle.

The kind of game, possibly, ripe to be tilted by a moment of inspiration from a special player. How Harbaugh would love for something magical from Corum, or quarterback J.J. McCarthy, who won the job after a committee approach in the opening weeks.

The Michigan Wolverines took a 34-19 lead over the Maryland Terrapins in the fourth quarter after Blake Corum dashed 47 yards for a TD.

“There’s an old saying in football that a running back who can miss somebody by the narrowest of margins is an unbelievable talent,” Harbaugh said in the midweek news conference, beginning with a Corum anecdote and swiftly warming to his task.

“Now, Blake can get so close to a tackler, within inches, and then make the slightest move where someone that close doesn’t even touch him. Some backs make the cut a yard away, or two yards away, but Blake Corum gets to the point where he can smell their breath and then make the slight cut and miss by the narrowest of margins. It’s incredible.”

The Hawkeyes, with a stout, finely-nuanced defensive system implemented by head coach Kirk Ferentz when he arrived in 1999 and overseen by defensive coordinator Phil Parker, will be fully prepared. They might even remember to bring the mouthwash.

Corum has nine rushing touchdowns to date, more than anyone else in the nation. He is on a blistering pace; consider that Hassan Haskins’ 20 TDs last season were enough for Michigan’s all-time single-season mark.

Corum has collected eight rushes of at least 20 yards — again, no one has more. He has gained more ground rushing than 25 entire teams. He’s at a whopping 119.5 yards per game, but the level of opposition is only going to improve.

These are, in some ways, the season’s most telling times. Behind Georgia, Ohio State and Alabama, there is a collection of teams all desperate to clamber into the elite group of four, which makes Michigan a squad that countless others would love to see stumble.

Who is most likely to be upset in Week 5? 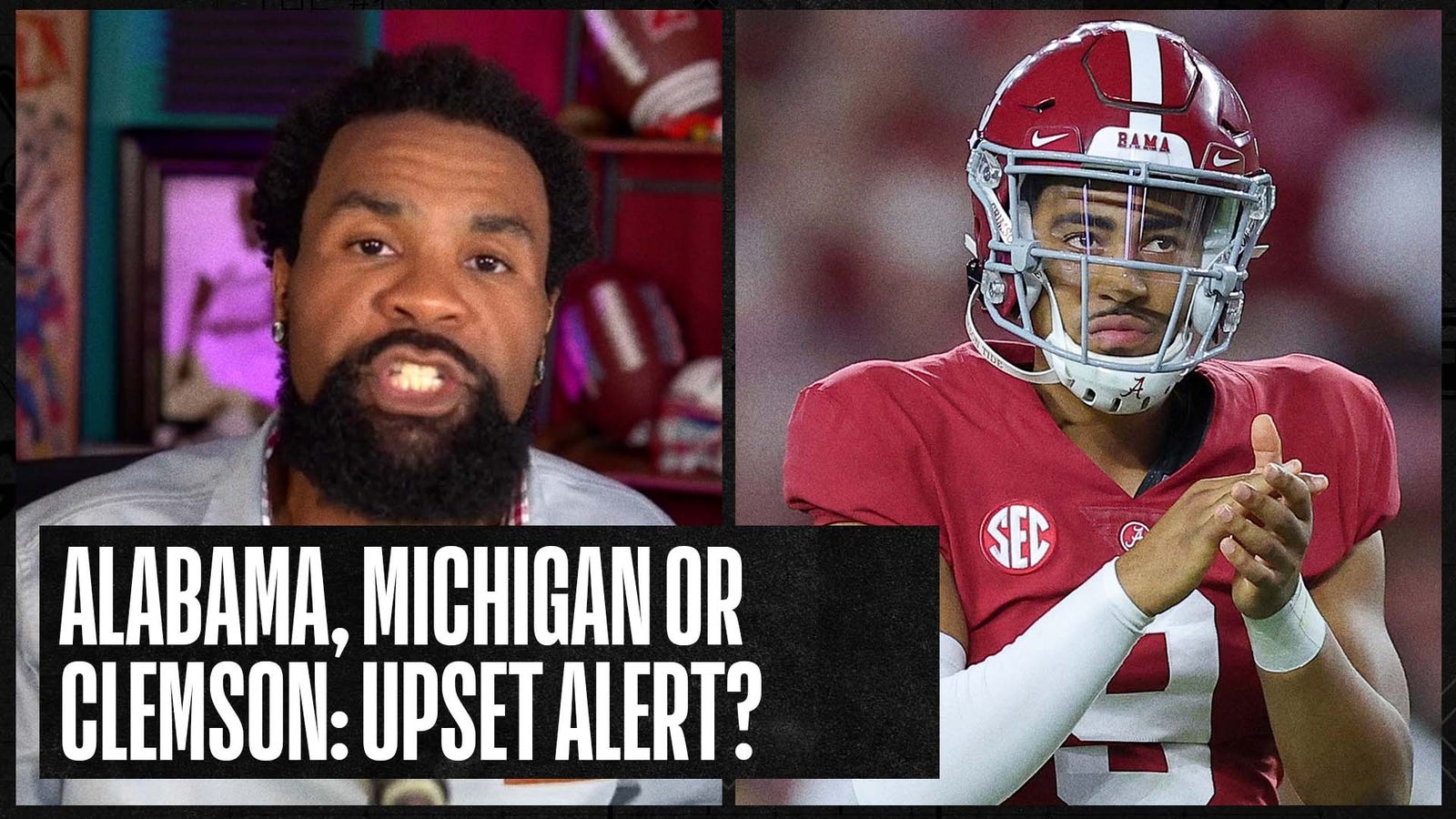 RJ Young breaks down a question from a listener: “Which top-10 team is most likely to be upset this weekend: Alabama, Michigan, or Clemson?

Texas A&M, Oklahoma, Utah and Notre Dame have already staggered out of the picture. Harbaugh wants Michigan to show it is made of sturdier stuff, and that it should be looking to move upward from fourth spot rather than glancing over its shoulder.

Given that he rarely pulls any verbal punches, has that inner fire never far from display, you’d have thought Harbaugh might have a spicy, hype-filled reaction to one straightforward question posed midweek.

But instead, Harbaugh chose to play it calm and coy, which is probably the exact opposite of how things are going to be on Saturday.

– Tiers for 18 CFP contenders, from Ohio State to Penn State, USC to UCLA

– Michigan-Iowa and more: Week 5 by the numbers

– Big Noon Kickoff: Everything to know about Michigan-Iowa

– They’re back? USC, Michigan, others show trickiness of a quick turnaround

Martin Rogers is a columnist for FOX Sports and the author of the FOX Sports Insider newsletter. Follow him on Twitter @MRogersFOX and subscribe to the daily newsletter.