Ross Chastain left Talladega Superspeedway in April excited after winning his second race of the season. He had clinched a spot in the NASCAR Cup Series playoffs, a first for Trackhouse Racing in its second season as a race team.

Getting a car in the playoffs would have been a suitable goal for Trackhouse, founded and co-owned by former racer Justin Marks, who brought in world-renowned musician Pitbull as an investor.

But as NASCAR heads back to Talladega, not only is Chastain still alive in the playoffs — Talladega is the middle race of the second round — but also Trackhouse has Daniel Suarez among the 12 drivers still in the running.

“My goal coming into the season really, just personally, was to have a shot of putting one of our cars in the playoffs,” Marks said Sunday before the race at Texas Motor Speedway. “So to be in the Round 12 with both is — I think we’re sort of playing with house money in our first year as a fully autonomous organization.

“It’s just a testament to the preparation and our process all year.”

Ross Chastain on his playoff approach

Ross Chastain talks about his playoff approach and whether he hears the chatter that other drivers won’t let him win a championship.

In another “not only” fact, both Chastain and Suarez are above the playoff cutoff with Talladega and the Charlotte road course still left in the “Round of 12,” NASCAR’s version of quarterfinals.

The four drivers who don’t win in the round and sit lowest in points will be eliminated after Charlotte.

“So until we go and do it … I made the joke to Justin before, ‘Exactly how you planned it, right?’ And a lot of it is the planning, and a lot of it is putting some of us in our positions has worked out.”

Most of the drivers look at this round as a wild card because of the unpredictable nature of both Talladega (where big crashes and the reliance on a drafting partner play big roles in where a driver finishes) and Charlotte (a road course at which most drivers stay on the lead lap, and one mishap late in the race could result in a devastating finish).

But look at where the Trackhouse drivers have won this year: Chastain on the Circuit of the Americas road course and then Talladega, Suarez on the Sonoma road course. Both drivers have had strong performances on road courses and drafting superspeedways.

“The way that we were working, I’m not surprised,” Suarez said. “With that being said, in a first year as Trackhouse, with two cars on this level is definitely very good.

“But we haven’t achieved the goal yet. We have to continue to push and see where this gets us.”

Daniel Suarez on the expectations to make the NASCAR playoffs 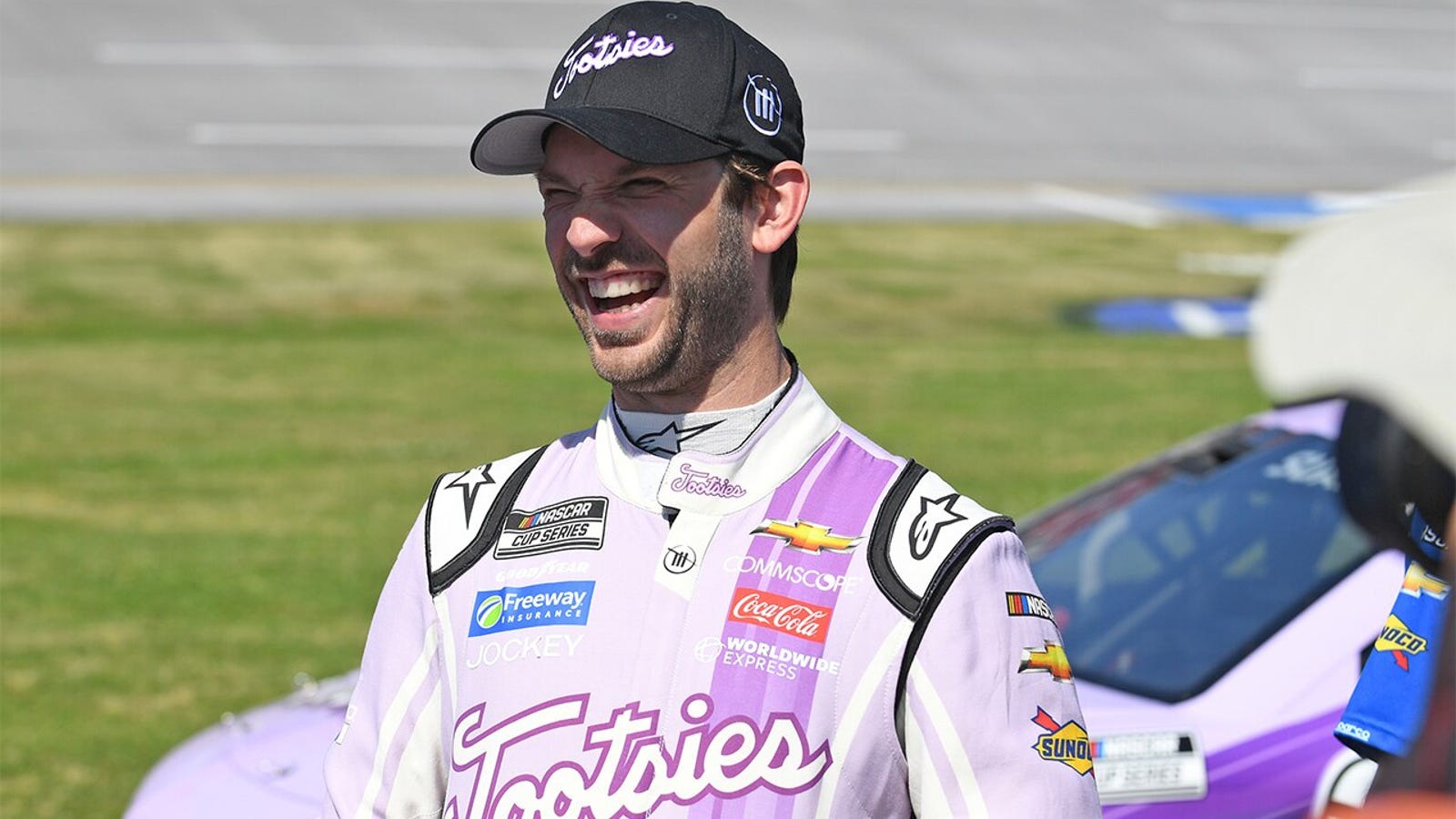 Daniel Suarez talked in August about feeling a need to win to make the NASCAR playoffs this year.

The goal? Could they seriously have a driver in the Championship Four and be a player in the finale at Phoenix?

“Somebody has to win it, so why not?” Suarez said. “At the beginning of the year, Justin Marks said something that at least in my mind, it really [stuck]: He said, ‘Why not us? Why not?’

“The only thing that we don’t have is the experience and the numbers that many other teams do have. We have the people, we have the sponsors, we have the manufacturer support. Why not? We haven’t got to this point by luck. We have to continue to do our thing and see where this is going to get us.”

Alex Bowman was among those who raced against Marks and also was a teammate of his for a bit at Chip Ganassi Racing, where they both made starts in the No. 42 Xfinity car five years ago. He said he isn’t surprised to see Marks’ team excel.

“That is cool because he is super-driven and super-smart,” Bowman said. “The little bit that I have been around him, it doesn’t surprise me about the success that they have had.

“Obviously, it’s happened very quickly, but I think we are at a time in the sport where things like that can happen with a brand-new race car. He has good race car drivers and good people working on them, and it’s cool to see their success.”

Trackhouse kept many of the Ganassi competition leadership, including former Cup championship crew chief Darian Grubb and Tony Lunders. That veteran presence helped smooth the transition, as Chastain and his team were kept pretty much intact as they began working with the original Trackhouse group and Suarez.

“The ticket moving forward is going to be not changing that, not putting any kind of new, undue pressure on ourselves — just making sure that we continue to commit to what got us here,” Marks said.

“It’s already proven to be a very volatile playoffs. It’s so hard to predict what these next two rounds are going to deliver. So we just have to make sure that we just commit to our process and see where the chips fall.”

“Preparation is the same for me: My week has not changed as far as my scheduling and how I build out my week,” he said. “Definitely some conservative driving on my part on track and some conservative measures from our crew to keep air in the tires and keep the car rolling.

“So there’s a direct correlation of risk versus reward on car setup. And I believe how fast you want to go or how much risk are you willing to take to finish the race.”

For a first-timer in the playoffs, Chastain is trying to remain cool about everything.

“There’s no added … pressure internally,” he said. “The only thought is to finish and to not mess up, not make mistakes, not make mental errors. I just keep my world small and move on to the next corner, the next lap, [and] if something happens, I’m not trying to make up for it.

So far, they have met the challenge. Chastain has avoided the run-ins with other drivers that defined his regular season. Suarez has made the most of what could’ve been worse days.

Chastain’s over-the-wall crew remains strong and owns the best average time for a four-tire stop in the 2022 season.

“I think we’re relaxed,” Marks said. “I think we do a pretty good job of blocking a lot of sort of the narrative around us out and just focus on each other.

“That’s been really important for Trackhouse … to make sure that all of our investments are inside the walls of our shop and just making sure that we really feel like we’re a team, and we’re working together and supporting each other. That gives us a lot of equity as we get deeper and deeper into the playoffs.”

What to watch for

The “safe” way to race Talladega is to stay behind the main pack and hope to avoid the big wreck.

But there are at least 11 drivers who believe they could use stage points. All the playoff drivers except Joey Logano, who is 37 points above the cutline, probably want stage points. That way, if they do get caught up in a wreck, they still got something. But they’ll have to weigh risk versus reward.

The only drivers who absolutely believe they need stage points are Christopher Bell and Alex Bowman, who sit 25 and 26 points behind the cutoff. If they don’t get any stage points, they’re likely looking at must-win situations … assuming most of the playoff drivers make it to the finish.

So what will they do? That’s the big question and something to watch at Talladega as the playoff drivers try to put themselves in the best position to go to the Charlotte road course in control of their own destinies.

Ty Gibbs was fined $75,000 for his pit-road antics in the Cup race at Texas Motor Speedway, where he door-slammed Ty Dillon under caution.

In the vicinity were crew members working on Chris Buescher’s car, as well as NASCAR officials. It was a dumb move.

NASCAR was then in a bit of a predicament, as it would seem a suspension could be appropriate in this situation. But if it suspends Gibbs, does it then have to suspend William Byron for spinning Denny Hamlin under caution on the racetrack? Some would say yes, but it could also be argued that intentional contact is more egregious on pit road.

A suspension also could have upended the Xfinity championship, which is where Gibbs has done most of his racing this year, before adding Cup substitute duties for the injured Kurt Busch. It could be argued that a suspension for a dangerous move should be effective in all series and Gibbs should pay that price.

But would it have been justified if NASCAR had suspended Gibbs for a few Cup races while keeping his eligibility in Xfinity?

Yes, it would’ve been. And that’s what NASCAR should’ve done. It would’ve sent a real message to Gibbs that if he’s going to race in the Cup Series next year, as expected, he has to stop the emotional tirades.

“I’m thankful no one was injured and will learn from it.” — Ty Gibbs on his pit-road door slam of Ty Dillon

Get more from NASCAR Cup Series Follow your favorites to get information about games, news and more.