Week 5 of the college football season kicked off with a bang as fans witnessed several upsets on Saturday.

Earlier on FOX, No. 4 Michigan went on the road and kept their perfect record alive after defeating Iowa by double digits, while Illinois dominated Wisconsin in Bret Bielema’s first return to Madison.

Meanwhile, No. 14 Ole Miss picked up its 13th straight win at home after taking down No. 7 Kentucky, Purdue dropped No. 21 Minnesota in Minneapolis, and TCU pulled off a huge upset over No. 18 Oklahoma in Texas.

Elsewhere, No. 9 Oklahoma State escaped No. 16 Baylor, and No. 2 Alabama defeated No. 20 Arkansas despite losing QB Bryce Young, who exited the game in the second quarter due to a sprained shoulder.

Closing things out tonight, No. 5 Clemson beat No. 10 NC State in an all-important ACC tilt, while No. 1 Georgia survived an upset bid from Missouri. Meanwhile, No. 13 Oregon hosts Stanford.

Here are the top plays from Saturday’s action-packed Week 5 slate!

Stanford at No. 13 Oregon

Big play for the Ducks

On the final play of the first quarter, Bo Nix hit Chase Cota, who took off to the end zone for a 49-yard score.

Nix hit Troy Franklin for a 10-yard touchdown on what was one of the better catches of the college football season to date. Replay review overturned the original call of an incomplete pass in favor of an Oregon touchdown.

Moments after Oregon recovered a Stanford fumble, Nix ran in the Ducks’ third touchdown of the game.

Defense was the name of the game early on in this one, but NC State put an end to the touchdown drought right before the half when QB Devin Leary connected with Ced Seabrough for a 2-yard score with 1:51 remaining in the second quarter to give the Wolf Pack a 10-6 lead.

Clemson came right back with a score of its own, courtesy of QB DJ Uiagalelei. The Tigers took a 13-10 lead into halftime.

Uiagalelei took off for a 29-yard run on Clemson’s first possession of the second half. The quarterback later hit Jake Briningstool for a 7-yard touchdown, putting Clemson up two scores. NC State connected on its second field goal of the game on the ensuing possession, making it 20-13.

Uiagalelei broke free for his second rushing touchdown of the game. This one was a 9-yard run, giving the Tigers a convincing 30-13 lead.

NC State answered back with a 4-yard touchdown run from Leary, but it was too little, too late as the No. 5-ranked Tigers held on to win.

Mizzou came out swinging against the No. 1-ranked Georgia Bulldogs, jumping out to a 13-0 lead midway though the second quarter.

Both teams traded field goals ahead of the break to make it a 10-point game.

For the first time under Kirby Smart, Georgia trailed by double digits to an unranked team at halftime.

On a drive that included a fourth-down conversion near the goal line, running back Kendall Milton ran in Georgia’s first touchdown of the game.

Daijun Edwards capped off an impressive drive with a 1-yard touchdown run, giving the Bulldogs their first lead of the game, 26-22.

Baylor opened up the scoring with a field goal, but the Bears’ lead was short-lived. Oklahoma State took over after QB Spencer Sanders connected with Bryson Green for a quick 8-yard touchdown.

Bryson Green makes a ridiculous grab in the end zone

The Oklahoma State Cowboys took a 7-3 lead over the Baylor Bears after Bryson Green made a ridiculous leaping grab in the end zone.

The Oklahoma State defense was clicking on all cylinders early, picking up a safety in the second quarter. Then, the Cowboys extended their lead after Jaden Nixon returned the second half kickoff 98 yards to the house. 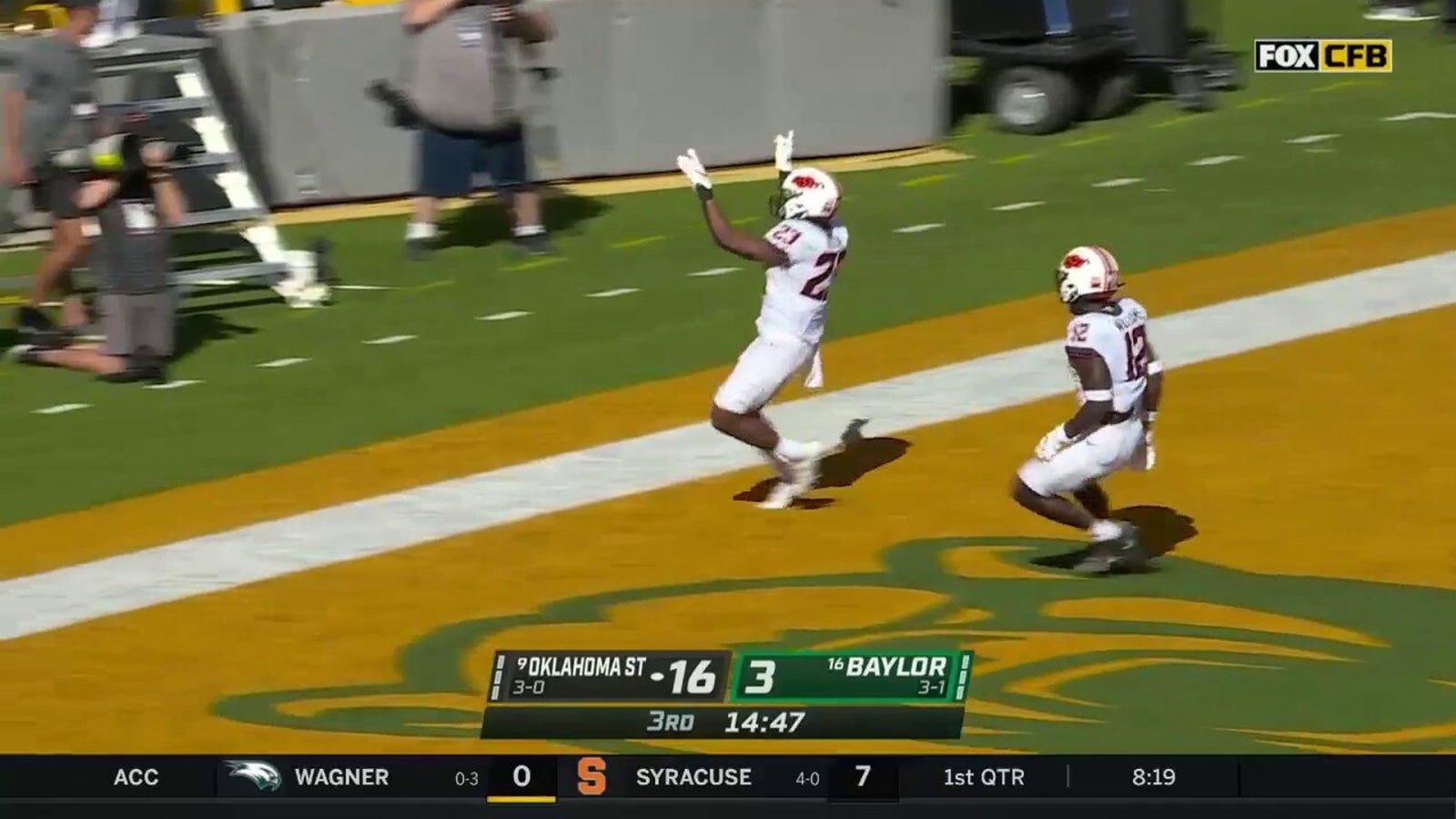 The Oklahoma State Cowboys extended their lead to 23-3 after Jaden Nixon returned the opening kickoff of the second half 98 yards for a TD.

Baylor fired back with a big play of its own, as QB Blake Shapen connected with wideout Monaray Baldwin for a 49-yard score to close the gap, 23-10. Blake Shapens throws a perfect pass to Monaray Baldwin for a 49-yard TD.

Oklahoma State’s offense didn’t let off the gas, with one miraculous catch after another in the second half.

Unreal catch sets up an Oklahoma State TD against Baylor

Baylor scored a 70-yard touchdown on fourth-and-5 from its own 30 when Baldwin zoomed through the Oklahoma State secondary en route to the end zone.

In the end, it wasn’t enough to spark a comeback, and the Bears came up short at home.

Blake Shapen connects with Monaray Baldwin on a 70-yard TD 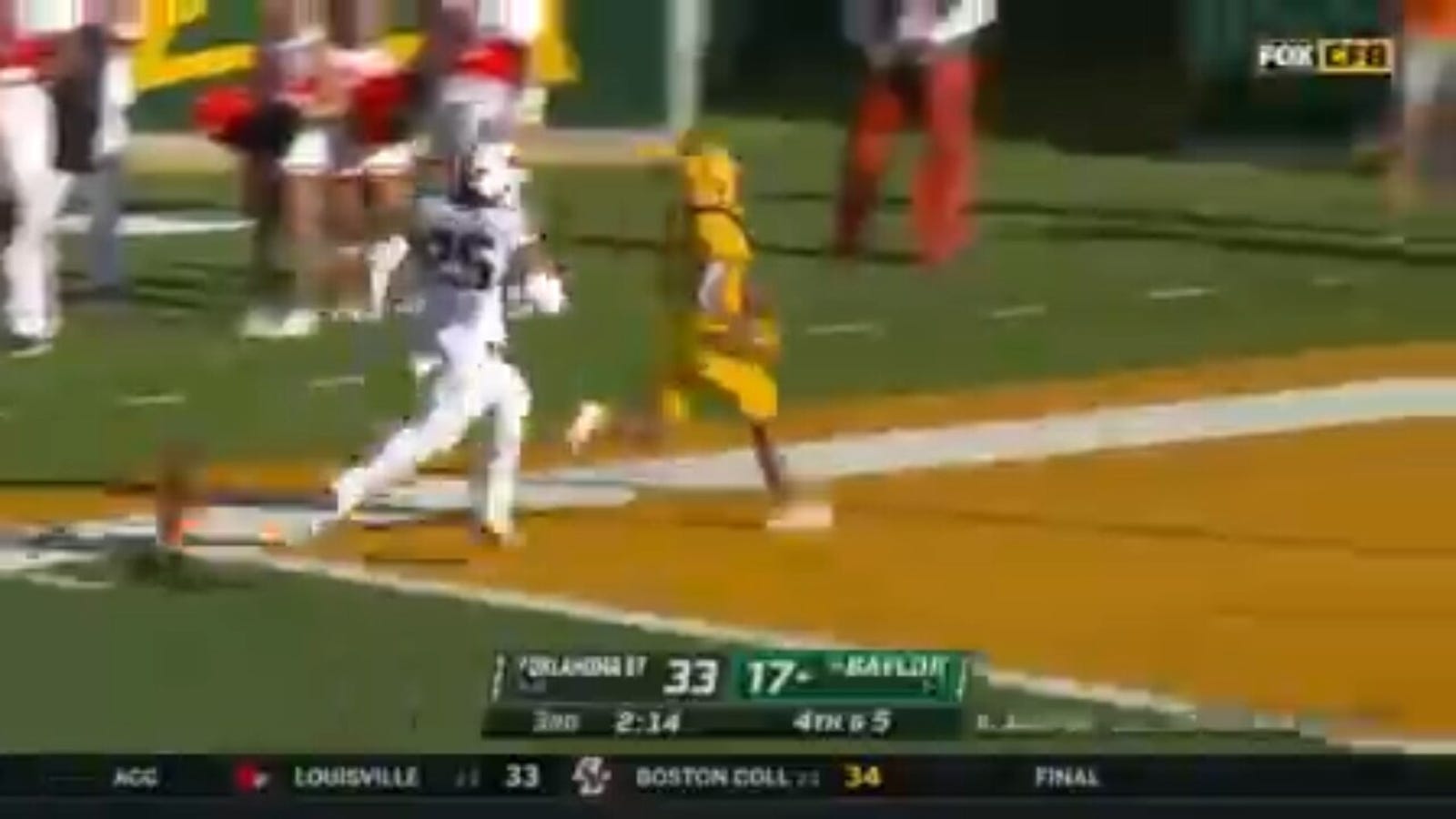 Alabama wideout Kobe Prentice came up with a 47-yard catch and run to give the Crimson Tide the early lead.

The reigning Heisman Trophy winner left the game early in the second quarter with an apparent shoulder injury. Young entered the injury tent before heading to the locker room. Backup QB Jalen Milroe entered the game for Alabama.

After finding themselves in a 28-0 hole, the Razorbacks scored 23 straight points, which included executing a perfect onside kick to make it a five-point game headed into the fourth quarter.

Alabama finally responded early in the fourth, as a 77-yard scamper from Milroe set up a 3-yard touchdown run by Jase McClellan to make it 35-23. Alabama continued to pour it on late in the frame, as RB Jahmyr Gibbs broke off for two monster runs — a 72-yard TD rush, followed by a 76-yard score — to seal the game.

Wolverines receiver Ronnie Bell took off for a 16-yard run to put Michigan up early in this one.

Michigan added two fields goal in the second quarter to extend its lead to 13-0 heading into the break.

Ronnie Bell finishes an impressive opening drive for the Wolverines 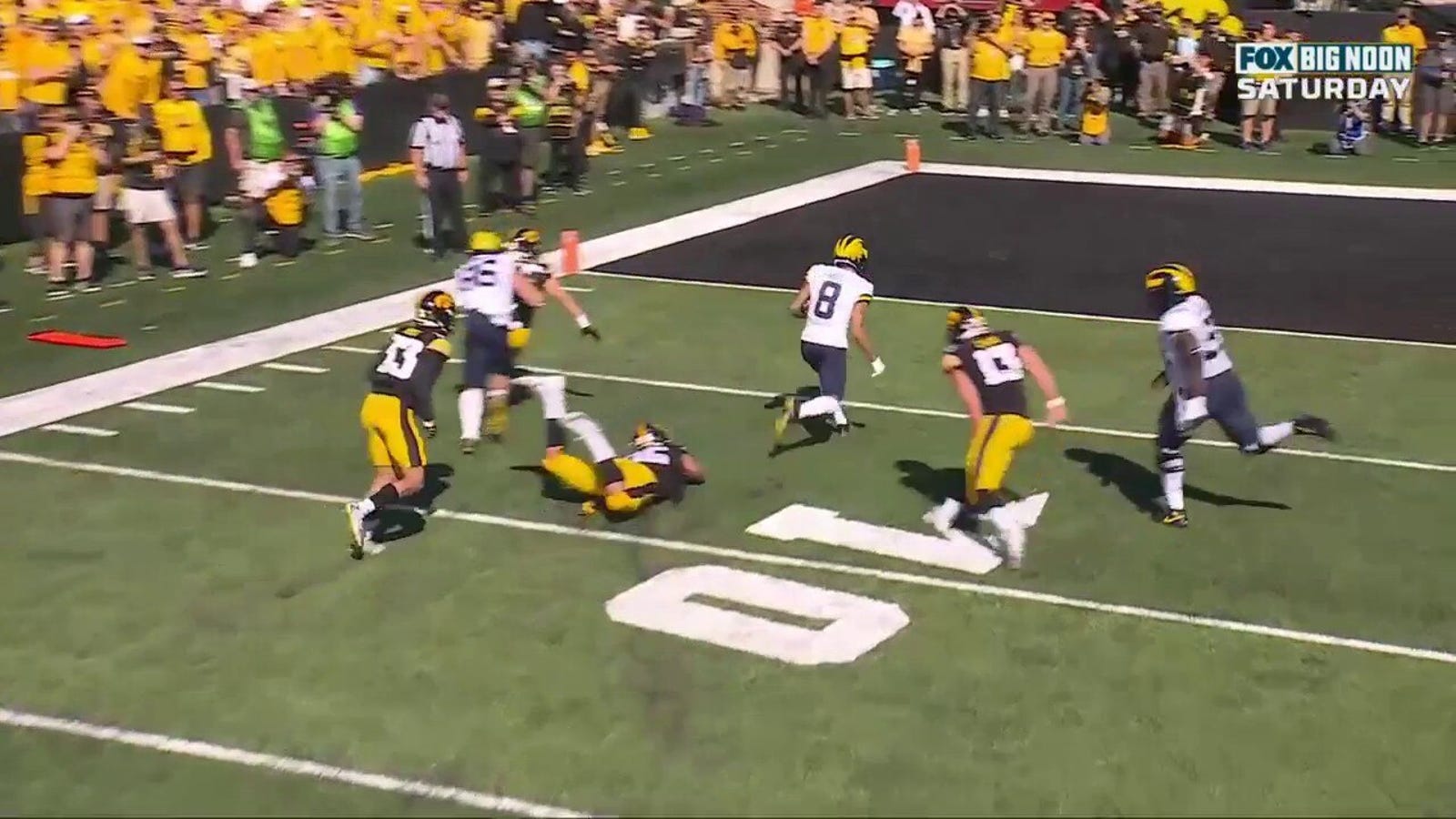 Ronnie Bell takes a reverse and finishes an impressive opening drive for the Michigan Wolverines to take an early 7-0 lead over the Iowa Hawkeyes.

Michigan QB J.J. McCarthy connected with running back Donovan Edwards for a 12-yard score on the Wolverines’ first possession of the third quarter, seemingly breaking the game open.

J.J. McCarthy finds Donovan Edwards in the back of the end zone 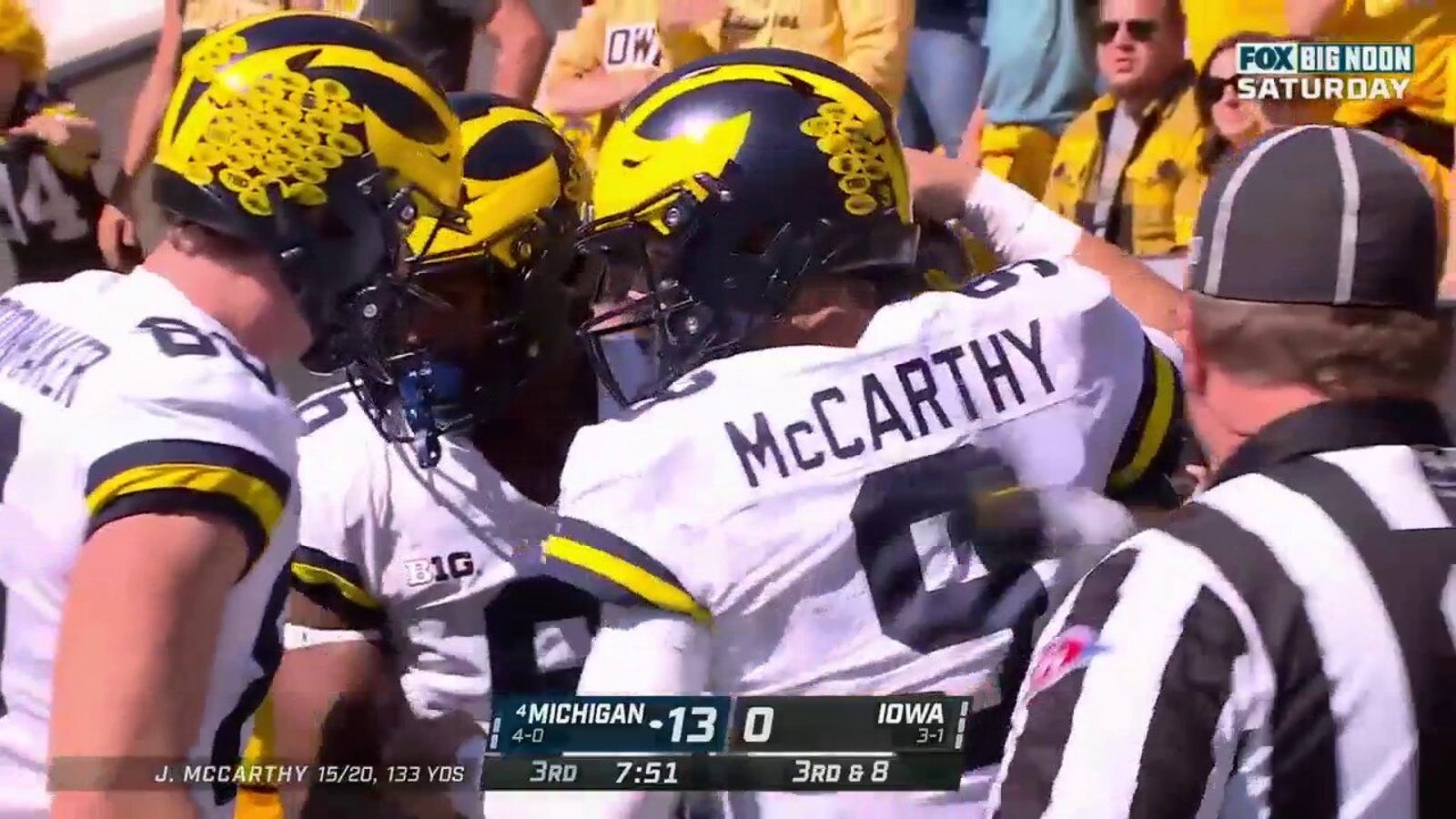 QB J.J. McCarthy finds RB Donovan Edwards in the back of the end zone to push the Michigan Wolverines’ lead to 20-0 over the Iowa Hawkeyes.

The Hawkeyes avoided a shutout at home after Kaleb Johnson scampered into the end zone on a 2-yard rush.

It wasn’t enough to spark a comeback, however, as the No. 4-ranked Wolverines cruised to an easy victory.

Kaleb Johnson gets Iowa on the board vs. Michigan 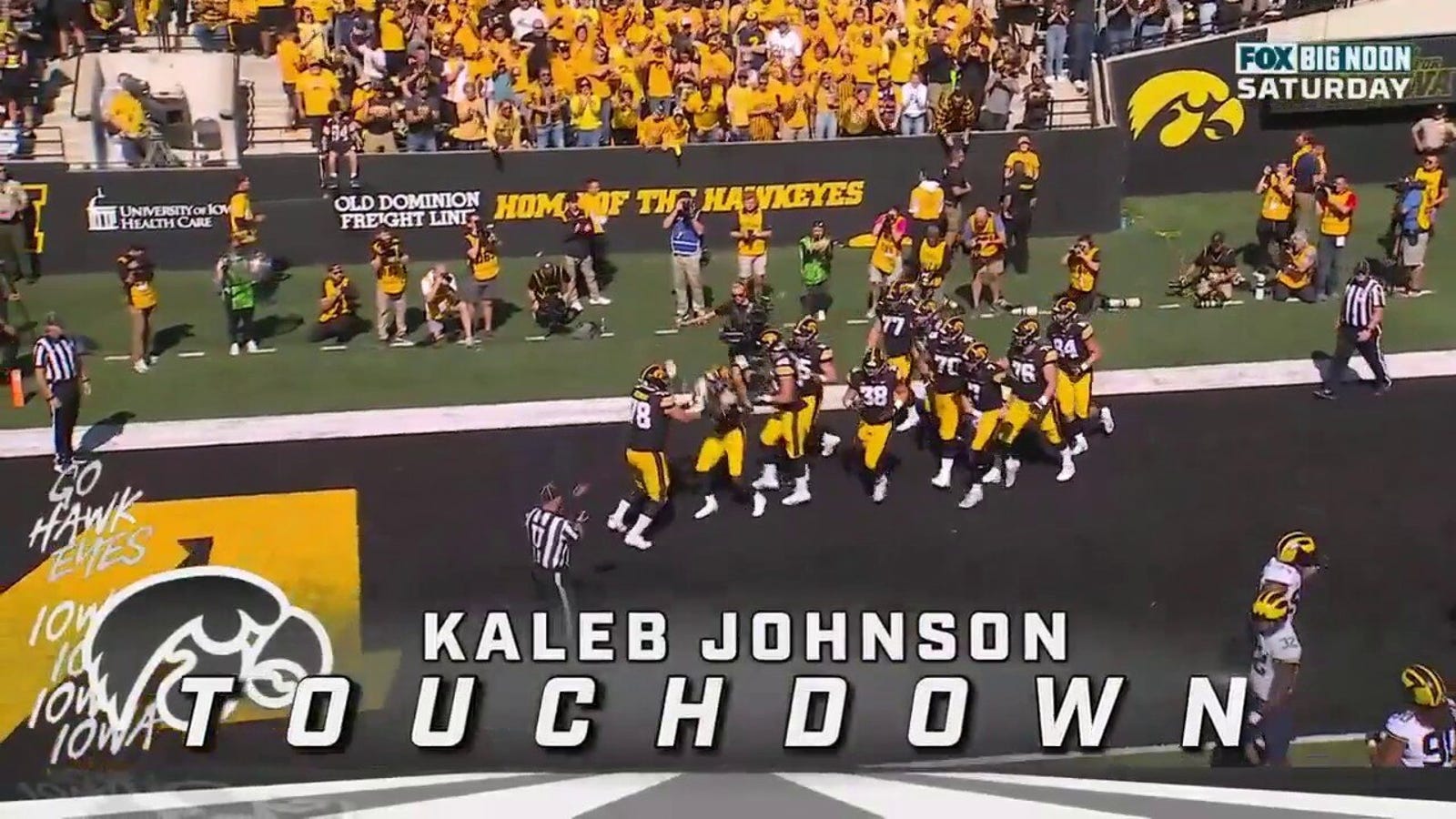 Iowa RB Kaleb Johnson reaches the end zone to get the Hawkeyes on the board.

Ole Miss RB Zach Evans forced his way through the Wildcats’ defense to give the Rebels an early lead, 7-0.

Ole Miss’ running backs were showing out in the first quarter. Freshman Quinshon Judkins took off 48 yards for a touchdown, good for a 14-0 lead after a missed Kentucky field goal.

Barion Brown got Kentucky in on the action, closing out the first quarter with an 85-yard kickoff return. The big gain gave the Wildcats great field position, and they scored on the following play to close the gap, 14-6.

After the Rebels picked up a safety and added another field goal in the second quarter, the Wildcats cut their deficit to 19-12 with a quick touchdown pass from Will Levis to Tayvion Robinson just ahead of halftime.

In the third quarter, Levis found tight end Jordan Dingle for a 17-yard score to even the score.

Ole Miss added a fourth-quarter field goal to take the lead, but Kentucky came charging back downfield immediately. Brown got the Wildcats into the red zone with less than a minute to spare, but the Rebels’ defense forced another turnover to seal the win.

No. 14 Ole Miss seals upset victory over No. 7 Kentucky 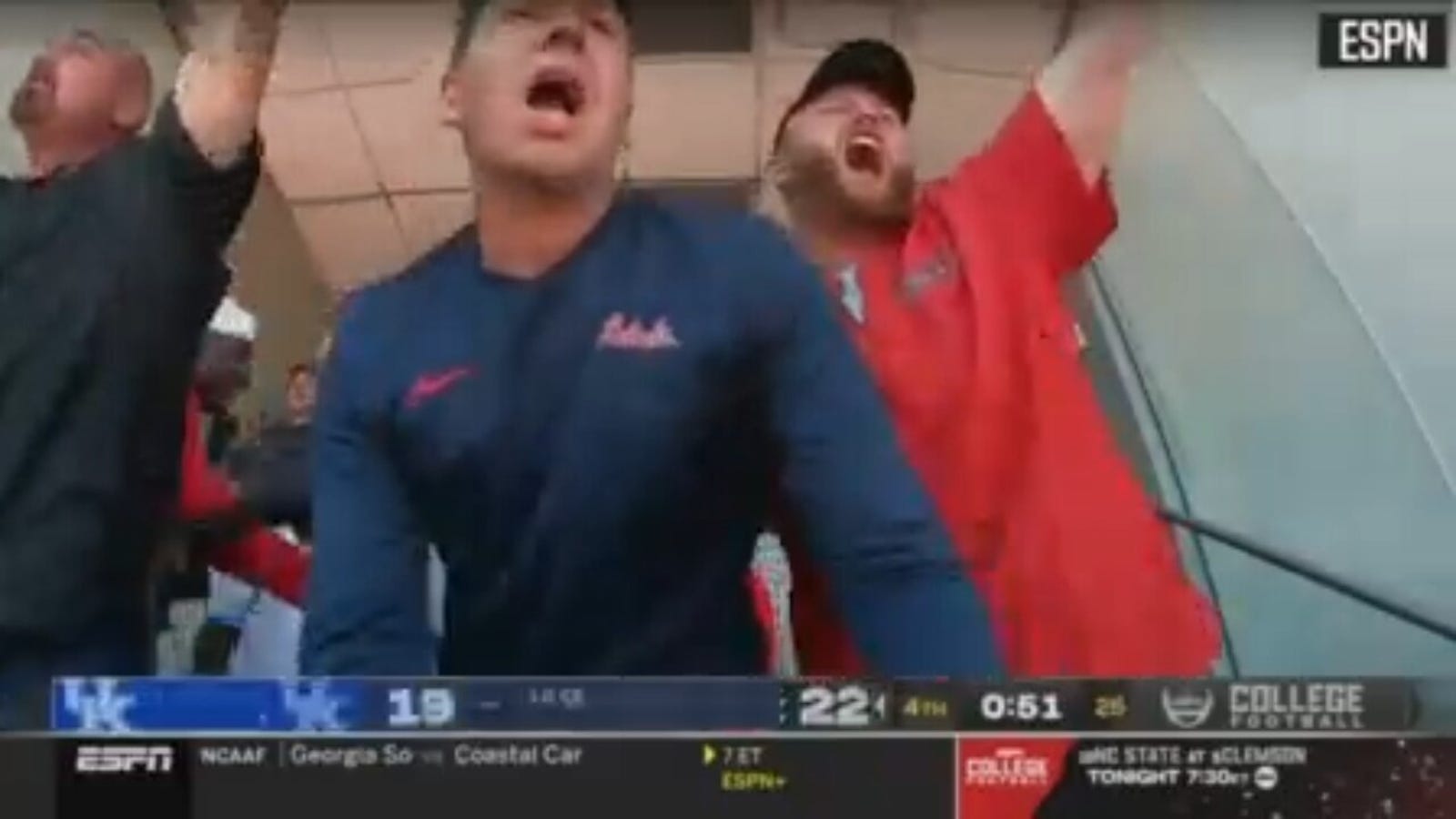 Wisconsin took an early lead over Illinois, thanks to a miraculous catch from running back Isaac Guerendo. QB Graham Mertz‘s pass was intercepted on the Badgers’ own side of the field, which led to a game-tying touchdown on the following drive for Illinois, courtesy of QB Tommy DeVito.

Tommy Devito punches in the QB sneak to tie Wisconsin 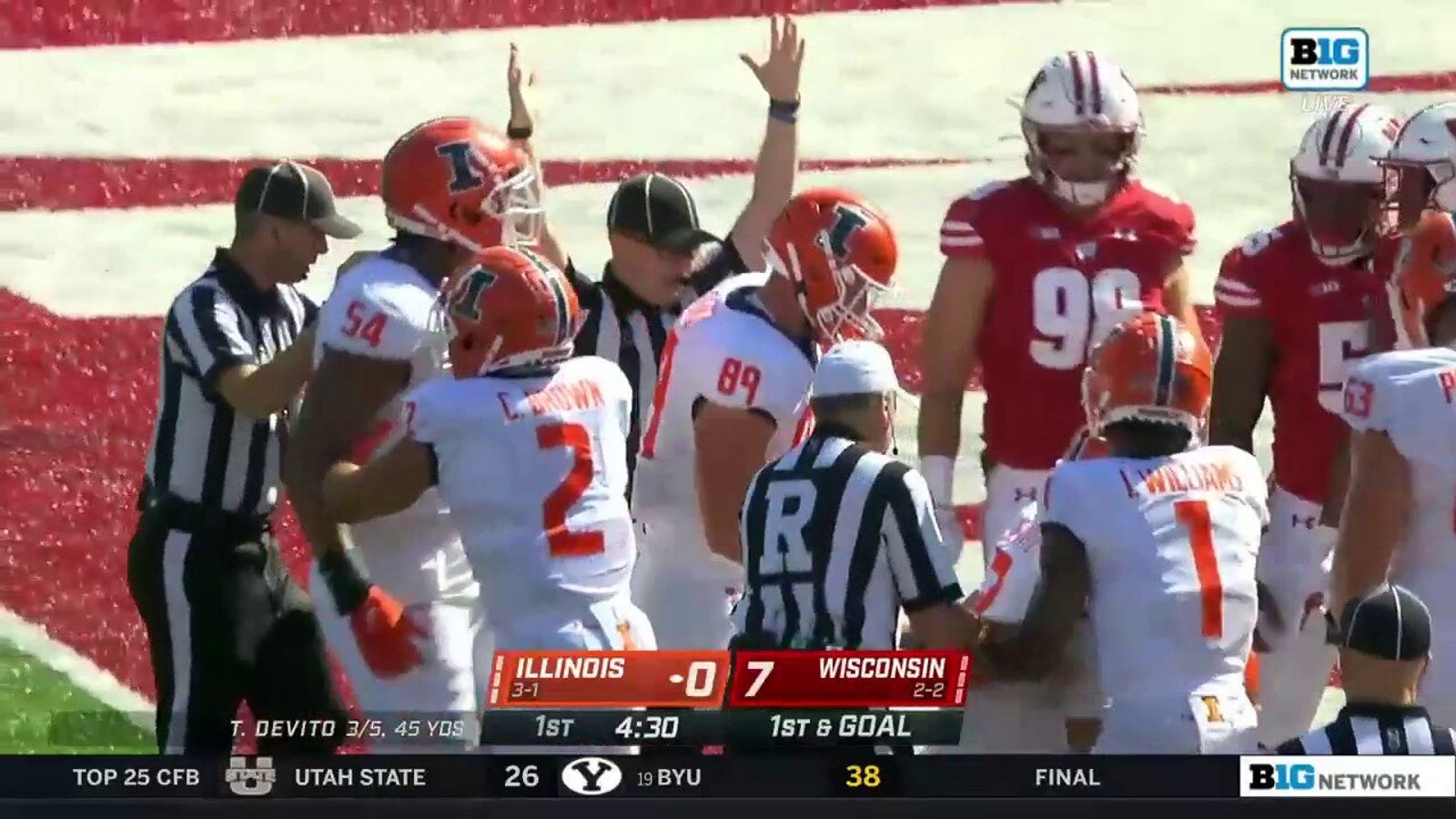 Illinois was tied 7-7 with Michigan after Tommy Devito punched in a QB sneak.

DeVito punched in back-to-back scores to put Illinois up by double digits. Meanwhile, the special teams unit showed up in a big way in the third quarter by recovering a fumbled Wisconsin kickoff in the red zone.

Chase Brown extended Illinois’ lead with a monster 49-yard touchdown midway through the third quarter, and the Fighting Illini went on to secure the road win.

Chase Brown breaks away for a 49-yard TD

Illinois took a 31-10 lead over Wisconsin after Chase Brown ran in a 49-yard touchdown.

BEST OF THE REST:

UTEP defensive end Jadrian Taylor recovered a fumble in the end zone and took it all the way back for the TD.

Catch of the year?

Liberty wideout Jaivian Lofton reeled in a jaw-dropping 34-yard touchdown pass from QB Kaidon Salter to give the Flames an early lead over Old Dominion.

TCU got off to a dream start over No. 18 Oklahoma, jumping out to a 17-point first-quarter lead over the Sooners. QB Max Duggan showed off his speed on a 67-yard score after tossing two TDs prior to that.

TCU continued to dominate and lead by 31 points to start the second half. Sooners QB Dillon Gabriel exited Saturday’s game after taking a huge hit from TCU linebacker Jamoi Hodge, who was ejected for targeting.

The Horned Frogs would finish off the blowout, 55-24.

Unranked Purdue ran for 160 yards en route to defeating P.J. Fleck’s No. 21-ranked Golden Gophers. The game was sealed with a fourth-quarter interception from Cam Allen, his second of the game.

Double coverage? Not a problem for Zay Flowers. The Boston College wideout reeled in this monster pass from QB Phil Jurkovec to put the Eagles ahead of Louisville at home.

Off to the races