The Heisman Trophy race continues to shift and evolve through Week 5 of the season.

Ohio State quarterback C.J. Stroud was fine on Saturday, though not quite as dominant as he has been up to this point. Meanwhile, two other contenders, Alabama’s Bryce Young and Oklahoma’s Dillon Gabriel, suffered injuries that introduce some uncertainty into their seasons.

This has opened the door for other rising stars to get into the mix.

Stroud has been consistently great throughout the season, as the Buckeyes have steamrolled the opposition on the way to a 5-0 start.

The steamrolling continued on Saturday with a 49-10 rout of Rutgers, but Stroud was not at his finest. The junior star went 13-for-22 for 154 yards, two touchdowns and an interception, only his second of the season

Still, it’s hard to see him taking much of a hit when his overall numbers are still great (1,376 yards, 18 touchdowns, two interceptions), and Ohio State continues to look like one of the three best teams in the nation.

The Ohio State Buckeyes stretched their lead to 21-7 after C.J. Stroud connected with Julian Fleming on a touchdown pass against Rutgers.

Next: At Michigan State on Oct. 8.

Young, the reigning Heisman Trophy winner, left Saturday’s 49-26 victory over Arkansas early in the second quarter after spraining his shoulder. 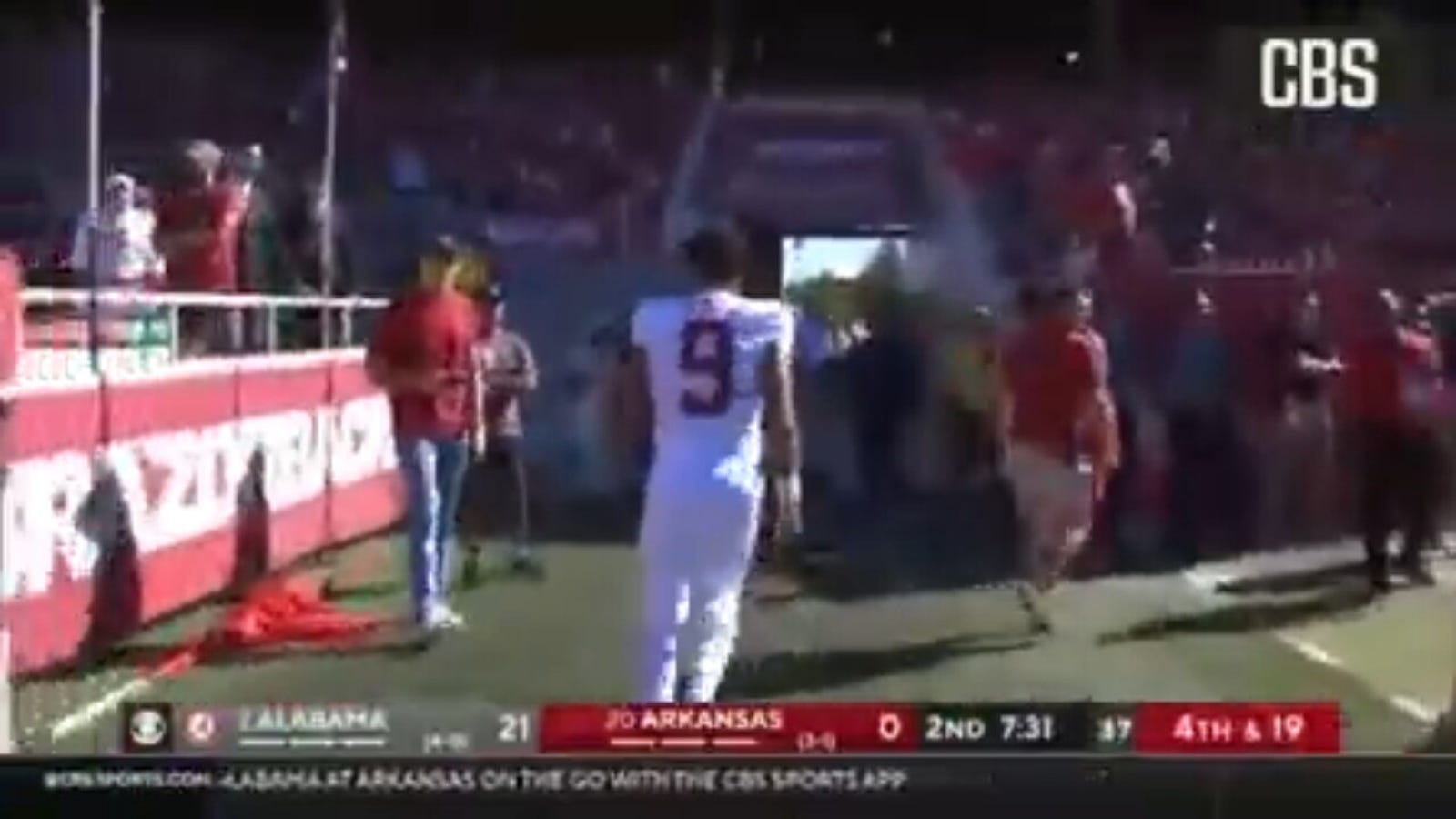 Alabama Crimson Tide QB Bryce Young exited the game with an injury against the Arkansas Razorbacks on Saturday.

The Tide led 14-0 at the time, but Young had not quite been his usual dynamic self, completing seven of 13 passes for 173 yards, with one touchdown and one interception.

Freshman quarterback Jalen Milroe, a four-star recruit out of Katy, Texas, was 4-for-9 for 65 yards and a touchdown in Young’s absence. Alabama also got a big boost from running back Jahmyr Gibbs — who has been on this list in the past — who rushed for 206 yards and two touchdowns on just 18 carries.

The Trojans weren’t exactly dominant in their victory over Arizona State on Saturday, but the same could not be said of Williams, who was unstoppable.

Next: Vs. Washington State on Oct. 8.

The Volunteers were idle this week.

The Bulldogs struggled to beat Missouri on Saturday, needing a 14-3 fourth-quarter run to pull off a 26-22 win.

Bennett was 24-for-44 for 312 yards and no touchdowns — but also no interceptions — in an up-and-down performance.

The Wolverines’ 27-14 victory over Iowa wasn’t the most aesthetically-pleasing game, not surprising when the rough-and-tumble Hawkeyes are involved.

But Corum was his usual dominant self, rushing for 133 yards on 29 carries. His 20-yard touchdown run late in the final quarter iced the game. The junior has rushed for 611 yards and 10 touchdowns this season, as the Wolverines have started 5-0. 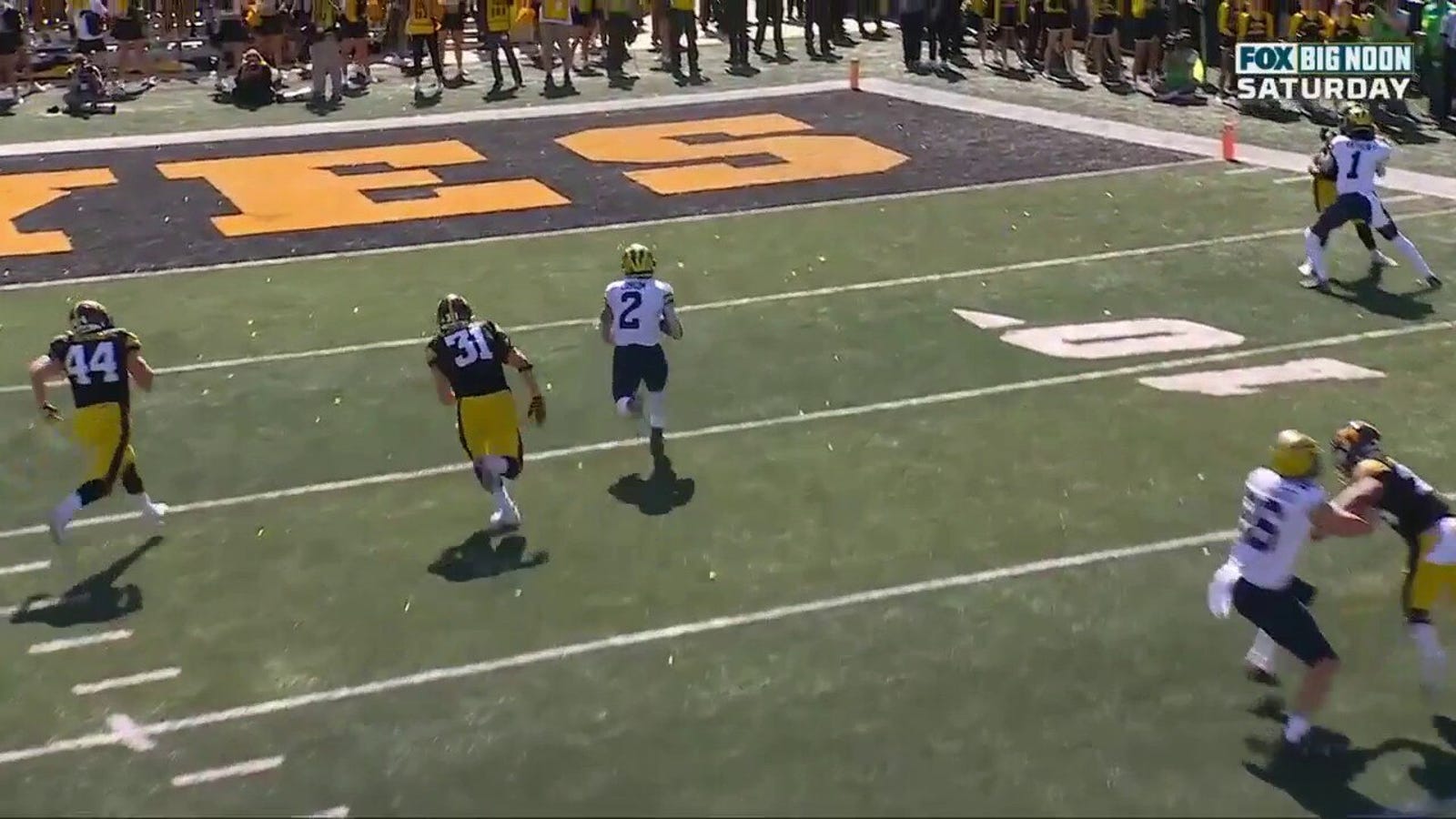 Blake Corum’s nasty juke gave the Michigan Wolverines a crucial late touchdown to secure a win over the Iowa Hawkeyes.

The former Nebraska quarterback dominated with both his arm and legs, passing for 116 yards and a touchdown, while rushing for another 171 yards and three touchdowns.

Things have been pretty rough for the Sooners these past couple weeks. Coming off a loss to Kansas State, Oklahoma was beaten handily by TCU, 55-24. Gabriel was knocked out of the game in the second quarter on a nasty hit by Horned Frogs linebacker Jamoi Hodge and did not return. Hodge was ejected for targeting.

Gabriel had not been particularly effective up to that point, however, completing just seven of his 16 pass attempts for 126 yards and no touchdowns. He will be evaluated for a concussion.

Hartman made his season debut on our Heisman watch, and he was solid in leading the No. 22 Demon Deacons to a 31-21 victory over No. 23 Florida State.

The junior QB was 22-for-34 for 234 yards and a pair of touchdowns, and he didn’t throw any interceptions.

Wake is now 4-1, with the loss coming to No. 5 Clemson in double-overtime.

It’s tough for defensive players to get noticed in the Heisman Trophy race, and Anderson is a perfect example of that. The linebacker’s odds have taken a hit of late, even though he continues to dominate.

Against Arkansas on Saturday, Anderson racked up seven tackles, including 1.5 tackles for loss, and registered half a sack for good measure.

10 incredible stats from Week 5 of the college football season