Natural gas storage levels in the European Union stand at nearly 84% and were higher in December than the average amount in reserve 4-6 years ago, the EU’s executive branch said Wednesday, despite Russian attempts to choke off supplies amid its war on Ukraine.

Fearing winter shortages, the 27 EU countries began stocking up on gas last year. Joint gas reserve levels climbed to 82% by September, well ahead of an 80% target set for November. Gas consumption also dropped by 20% from August to November as prices spiked.

Angered by EU war-related sanctions, Russia tightened its gas taps to Europe last year. Its pipeline gas accounted for 40% of all gas Europe imported before President Vladimir Putin ordered his troops into Ukraine in late February, but now it only accounts for around 9%.

“It’s a fairly good position to be in,” EU commission spokesman Tim McPhie told reporters. “We have a healthy level of gas storage for the start of this year, but we are by no means complacent. We know that this year will continue to be challenging.”

A tanker loaded with liquefied natural gas at a floating terminal in Wilhelmshaven, Germany, on Jan. 3, 2023. The European Union announced that natural gas storage levels stand at 84% despite Russia attempting to cut off the supply.
(Sina Schuldt/dpa via AP)

The commission estimates that joint gas storage levels stand at almost 84%, and that storage levels in December were 13% higher than the EU average in 2016-2018. Energy prices have also tumbled in recent months, in part due to milder than expected winter weather.

“The more we can invest in energy efficiency, reducing energy use, and the more that we can give a boost to renewables the better we will be based in terms of reducing our dependence on gas,” which influences electricity prices and contributes to global warming, McPhie said.

The first regular shipment of liquefied natural gas from the United States arrived in Germany on Tuesday, part of wide-ranging European efforts to find new, more reliable suppliers and replace resources once bought from Russia. 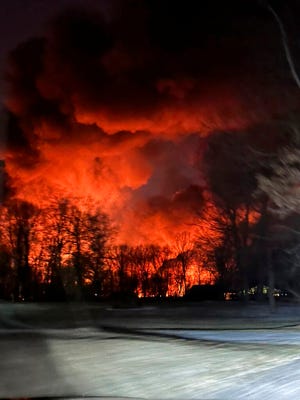 Brentford ease to win over Saints
1 hour ago